Trees Don’t Grow to the Sky

July 31, 2020 — This chart shows how just much the top 5 companies have dominated the stock market. This year almost all of the increase in the S&P 500 index has come from these 5 stocks. The other 495 companies are still down this year. 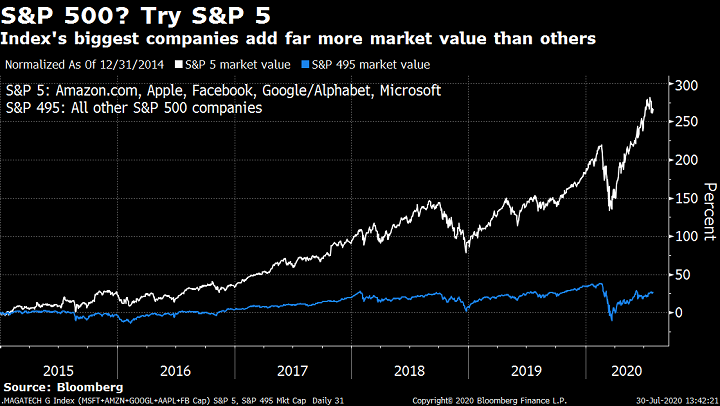 Four of these companies were called before the House Antitrust Committee on Wednesday to address their domination of their industries. Amazon accounts for 38% of online sales. Apple has half of the US smartphone market. Facebook has about 70% of the social media market. Google handles 90% of all searches. This was made possible in large part by the Fed’s low interest rate policy of the past decade which made it cheaper to finance the acquisition of other companies.

There is now growing sentiment among US politicians of both parties to regulate these companies although perhaps for different reasons. Being curious and a wee bit cynical of these things, I checked on OpenSecrets.org to see how much money the internet industry contributes to Congressional candidates. It seems not very much. In the 2018 election cycle, Internet industry PACs gave a total of $3.6 million to Congressional candidates while Defense, Pharma and Energy companies gave $18.1 million, $17.2 million and $31.5 million, respectively. It’s hard to know what Congress would or could do but it is becoming increasingly likely that they will do something.

Meanwhile, Amazon, Apple and Facebook reported impressive earnings for the 2nd quarter and their stock prices jumped. In comparison, the US economy declined 33% during the same quarter. These are excellent companies and perhaps their stock prices are justified by their growth potential. In Europe, regulators have already started to rein them in. If the US follows, their growth may not be what the market is taking for granted.

A recent article in Barron’s pointed out that if these 5 stocks were to drop 10%, the other 495 stocks would have to rise 90% just to keep the index even. The Fed’s cheap money policy may have provided lots of fertilizer but trees don’t grow to the sky. The larger these companies get, the harder it is for them to continue their past rate of growth.

Tax Appointment Checklist – “What Do I Bring?”